On Sunday, members of various communities came together in Redmond in an effort to educate people on historical events so as to not repeat the mistakes of the past.

The event, “Vigilance Against Injustice,” was co-hosted by the Muslim Association of Puget Sound (MAPS) in Redmond and Islamic Center of Bothell (ICOB) and featured speakers from the local Muslim, Japanese American and Jewish communities. They discussed the lessons learned from the incarceration of Japanese Americans during World War II as well as the Holocaust in Europe, drawing parallels to present-day bigotry and fears against various minority groups.

ICOB director Ryan Welton and lead organizer for the event said the current political and social climate in this country surrounding Muslims, Latinos, Jews and other minority groups “bears stark resemblance to the vitriol and attitudes that prevailed in both America and Europe leading up to World War II, culminating in the tragedies of the Holocaust and the incarceration of Japanese Americans.”

“We wanted to draw attention to what has come before us so that we can try to understand that those occurrences were not isolated events that could never happen again,” he said. “Our situation now is not as bad as what those groups experienced at the height of their persecution, but the whole point is that we should never allow it to get that bad in the first place.”

Welton said if people could take away one thing from Sunday’s event, it would be to pay attention to the rhetoric, language and actions employed by those who persecuted Jews and Japanese Americans in the 1930s and 1940s and look at what is being said and done to the Muslims, immigrants and other minorities in this country today.

He asked, if people understood that they are living through a moment that others would look back on and realize was one of historical significance, what would they do to ensure these terrible events never happen again?

“It’s vitally important that we take a look at everything that is going on in this country, and how minority groups are coming under attack,” said Welton in a press release. “The most important thing we can do is come together and support one another, because when ordinary people stand by idly and do nothing, or give into irrational fear and hatred, that’s when society fails. We have to take the examples of the tragedies that came before us and understand how we can learn from them so we don’t repeat our mistakes.”

One of those past tragedies is the Holocaust during the Second World War. 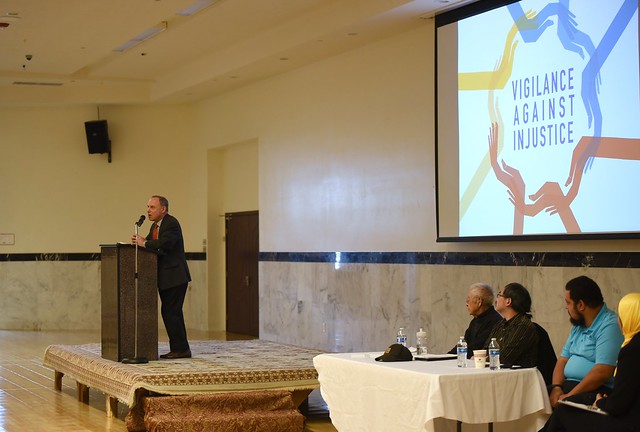 Ron Friedman (above), an attorney who serves as vice president of the board of directors of the Holocaust Center for Humanity in Seattle and spoke at Sunday’s event, said there are lessons that can be learned from this part of history so that no human — not just Jews — would ever experience something like that again.

He said no matter what god people believe in — or if they believe in no god — everyone is in this together, likening things to being on a boat.

“We better row together or we’re going to flounder,” he said.

Friedman said there is a lot of misunderstanding out there and people being pit against each other. Allowing discrimination to happen based on someone’s sexuality, pitting working class white Americans against minority groups, denigrating the press, “it’s hardly rowing together,” he said.

Friedman saw Sunday’s event as a forum to discuss these things and learn from others’ experiences.

From the centuries of discrimination and persecution the Jewish community faced that culminated in the Holocaust, to the Japanese American internment during World War II, to present-day hate crimes against Muslims, Friedman said “this ugliness” can be directed toward any community.

“People are really concerned and have fears,” he said, adding that as a result there is a lot more political activism in society than even a year ago. 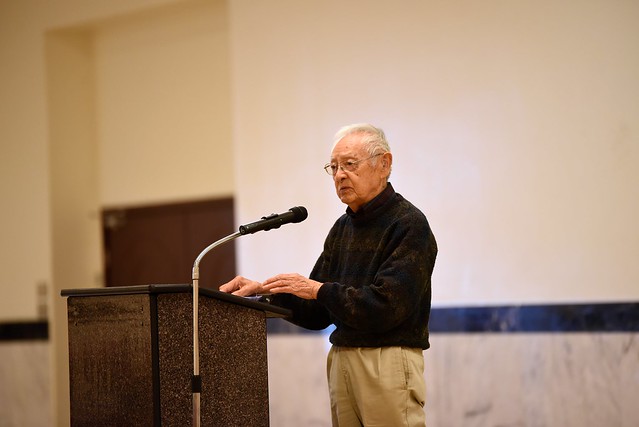 For Kenji Onishi (above), a second-generation Japanese American, speaking about his experiences in the Minidoka relocation camp in Hagerman, Idaho as a teenager was about not allowing the injustices against his community to happen to anyone else.

Onishi added that he hopes history will not repeat itself, though he does see similarities in the language and rhetoric used to describe Japanese Americans and what is used today to describe the Hispanic and Muslim communities.

Onishi, who also served in the U.S. Army until 1946, said seeing this happen has led him to speak up about his experiences because if people are more informed, they will be able to make better judgments for themselves. 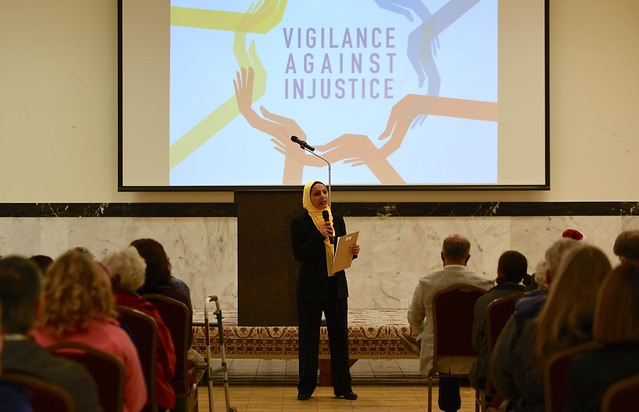 Aneelah Afzali (above), founder and executive director of MAPS-AMEN (American Muslim Empowerment Network) and the moderator for Sunday’s event, said the event went well and there were people from all backgrounds, faiths and ethnicities in attendance.

She said one of the goals of the event was to remind people that the injustices of the past “can happen today” and they need to be proactive in standing up for each other.

As an American Muslim, Afzali said many people do not know any Muslims and so it is easy for them to believe the misinformation that is being spread about her religion. The solidarity from allies of different backgrounds showing their support and standing up for her community is significant.

“That’s very powerful…and inspiring to me,” she said.

Afzali added that they also included information about actions people can take to get involved: tinyurl.com/z78fd4m.

Welton added that American Muslims are not any different from other groups that make up the fabric of American society.

“American Muslims share the same American values and freedoms that we all cherish, knowing that we are all in this together and uphold the Constitution and the laws of the United States,” he said in the press release. “American Muslims share our country’s strong family values, dedicated to raising and educating our children, and want to succeed in the traditional American way — by working hard and supporting our families. American Muslims deserve the same opportunities as all Americans — to build better futures for our families and children.” 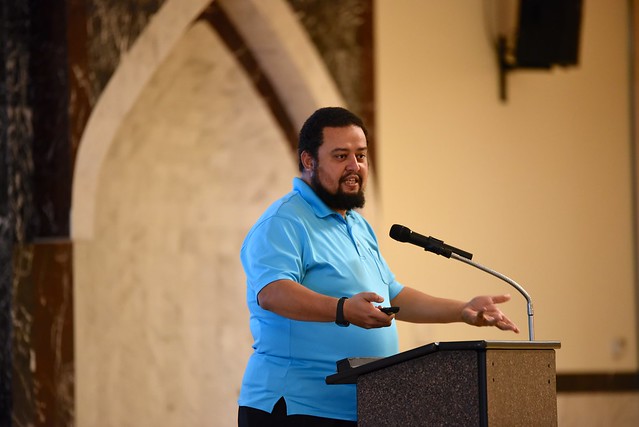 During his speech, Tarek Dawoud (above), who is the president of the Council on American Islamic Relations of Washington (CAIR-WA) and the president of the Interfaith and Outreach Committee at the MAPS, touched on the similarities of historical events and what the Muslim community is currently experiencing.

Dawoud noted that during World War II, Japanese Americans were targeted for their ancestry, even though they were American citizens. Their loyalty to the United States was questioned and the same can be said about present-day American Muslims.

Dawoud said Sunday’s event and others like it are important because as individuals, people’s voices are easy to dismiss. But that is more difficult to do when people come together to speak up. He added that it also helps people know that they are not alone when others show their support.

That support also extended to collaborations. Dawoud said following the speeches, he saw people networking and exchanging information so they could work together and partner with each other in the future.

The regulations will impact 19 areas around the state.

Redmond has begun the process again for the 2021-2022 biennial budget.

The complications of counting COVID deaths in Washington

State relies on results of tests and death certificates in calculating the daily toll of the disease.

Republicans file lawsuit over Inslee’s emergency: ‘Facts, and the science, are clear’

How to report unemployment fraud

Former Bothell mayor Joshua Freed and initiative-pusher Tim Eyman could be the front-runners.

Hub collects links for more than 300 local resources for people affected by virus.

The authority held its first meeting on Thursday.

Motorcycle fatality increase a cause for concern | Washington State Patrol

12 deaths in April across state